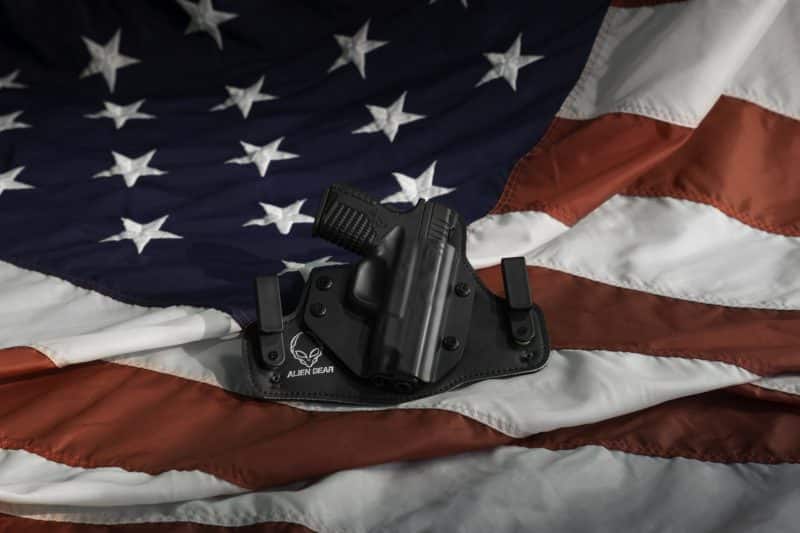 Airsoft is a popular hobby in the US. If you want to support your local businesses and economy it might be wise to buy domestic airsoft guns. But what are the best American made airsoft guns? Let’s find out!

Now I would like to point out that there are many American companies that sell rebranded Chinese and Taiwanese airsoft guns. I’m not going to be introducing these as I think you should just buy the “original” (they are all ripped off copies, usually of Maruis design), for a much cheaper price.

Instead I’ll be focusing on actual made in America airsoft guns. Some of them might still be mainly copies of the original Japanese designs but atleast they are manufactured in the US. This means buying them sustains and creates new jobs in your domestic market (assuming you’re an American). It also usually means the companies stand behind their products and offer superior quality control, guarantees, spare parts and maintenance services.

Not so surprisingly there are a lot of AR15 based guns made by American airsoft manufacturers. I mean there are other models out there but the AR5 definitely seems to be the favorite.

So without further ado, let’s check out the US airsoft gun manufacturers and what they have to offer in different price ranges!

Tippman is an American based company that is better known for their paintball guns. In recent years they have started to manufacture airsoft guns as well.

If you have ever tried paintball or even heard about it you probably have seen a Tippman gun. They are pretty much an industry standard so they have a reputation to keep up so their airsoft guns are top-notch as well. Their line of airsoft guns are premium AR15 based models with different operating principles.

Most products by Tippman are made in the USA and they continually strive to produce outstanding USA made products. So this is definitely a company to consider if you want to support American companies.

Like Tippman, Crosman is not originally an airsoft manufacturer and has branched out to airsoft only in recent years. Crosman is well known for their US made, yet affordable air guns in all shapes and sizes. They produce everything from backyard blinking BB guns to serious competition grade air rifles. They even produce air rifles and air bows (yeah, that’s a thing) for hunting.

Crosman was established in 1923 in Rochester and they employ over 300 workers in their manufacturing facilities in Bloomfield, NY. In addition, they support thousand of U.S. jobs at other companies due to component manufacturing, transportation, technical support etc.

So they are another large American company that actually manufactures airsoft guns, using American parts and labor.

Crosman offers a line of affordable airsoft guns in different designs. The cheapest being toys for kids and the top line being affordable intermediate gaming guns.

American made airsoft guns under 100 dollars

If you are looking for an affordable starter gun or a quality blinker for the kids that’s made in the U.S. your options are quite limited. In this case my recommendation would be the Crosman AREKT Commando kit.

It comes everything you need to get your feet wet with airsoft so to speak. All you need is some quality eye protection and you are good to go! Great for kids playing airsoft in the backyard. Not so great for serious airsofting however.

The build quality is superior compared to cheap Chinese toy guns and the performance is actually pretty good with FPS being around 300 on both guns. Accuracy is decent as well. But they are cheap springers and you get what you pay for.

American made airsoft guns between 100 to 300 dollars

Just over $100 at RRP $119 is the Crosman GFSMGSubmachine gun which is clearly a replica of the Thompson M1, the legendary .45 caliber sub machine gun.

This one is a AEG which means it’s electrically operated and comes with a battery and a charger. It’s not really a serious AEG but great as a starter gun. The gear box is plastic but it’s a copied Marui V3, so you can pretty much replace the whole thing if you wish to upgrade it.

Considering the price it’s a pretty nice gun you will surely have lots of with!

Just make sure to get some high quality heavy BB’s (0.28g and up) because the hop up is very powerful and the lousy 0.2g BBs (I don’t really get why they pack these along with it) will fly up because of the powerful hop up. This is a good thing, considering you want strong hop when using heavier BBs, like you should be using in an airsoft sniper rifle.

If you are looking for a serious gamers gun made in America, my recommendation would be the Tippman Arms M4. It’s a gas operated premium grade M4 replica. The great thing about it is it accepts both CO2 cartridges and Remote Line Adaptor.

Performance is top-notch and you really get what you pay for. The muzzle velocity is adjustable between 300 – 400 FPS so you can use it for both CQB and outside field games with a simple twist of a knob. Just make sure your local rules allow the usage of adjustable gas guns.

Even the rate of fire or ROF is adjustable between 8-15 rounds per second. Since it’s a gas gun there is no need for batteries and there are very little moving parts. This means low maintenance and high reliability. Something you should always look for in a high quality gaming gun.

Well there you have, some of the best airsoft guns that are made in the USA. If you are an American and want to support your country, domestic business and the economy definitely pick out something manufactured in the U.S.

If you have any questions, don’t hesitate to drop a comment and I will do my best to help you out!

4 Replies to “American made airsoft guns”